Traditional Knowledge on the MacKenzie River

A video presentation of a workshop to introduce nuclear physicists from the Nuclear Waste Management Organization of Canada to a working traditional knowledge-based fish camp in the Mackenzie River area. The purpose was to acquaint the scientists with traditional knowledge in a real-life working environment.

Traditional Knowledge on the MacKenzie River by Alan R. Emery is licensed under a Creative Commons Attribution-NonCommercial 3.0 Unported License.
Permissions beyond the scope of this license may be available at www.kivu.com.
We had four Elders with us on the expedition who explained and demonstrated the various tasks on which they depend for their lives during the winter months when it is no longer possible to fish on the river. 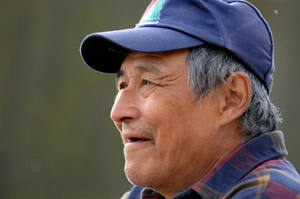 Each Elder was especially skilled in the traditional knowledge of the Dene people who live on the Deh Cho (MacKenzie) River. Our hosts, the Lafferty family, were from Port Good Hope in the North West Territories. The area where they live is too far north to be able to grow crops using agricultural techniques that are familiar to the people who live in the south of Canada. 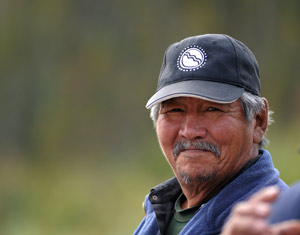 This means the only way they can make a living is to hunt and fish. And they are very good at their skills. But traditional knowledge is much more than just knowing how to hunt and fish. They need to be able to understand and predict the weather before they set out on the powerful currents of the Deh Cho. The NWT is a difficult area to live. It is very cold in the winter and because it is so far north that for some months, the sun never comes up over the horizon. Some of the animals are dangerous. 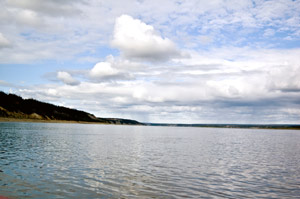 Grizzly bears routinely wandered nearby, their paw prints as big as my booted foot. On our three hour trip up the MacKenzie in a very fast boat, we saw perhaps five camps that might have held two to four people in each camp, and not all were occupied. There are very few people in this vast expanse of forest. And yet these people with very simple tools, a shot gun, some nets, an axe, some cooking tools and tents, are completely confident in setting out to stock the larder for the winter. 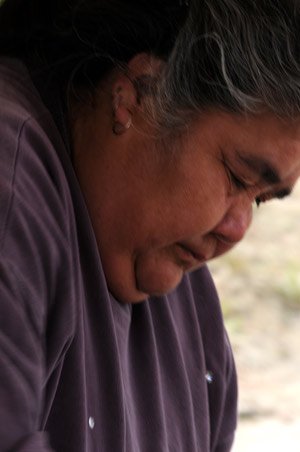 Once we arrived at the camp, we were introduced to our quarters — tents. And we knew it was going to be cold. We had brought our own choice of clothing and sleeping bags. Our hosts had made the tents comfortable by cutting spruce boughs as our mattresses and had small wood stoves for heat just as we went to be and for heat in the morning. It was always a contest to see who was the bravest to get up and light the fire in the morning. 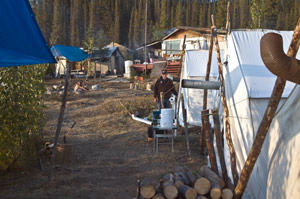 However the sunrises on the Deh Cho were spectacular. The air was cold causing mist to rise off the river in the golden light of the rising sun. Fortunately the nuclear physicists who were there to learn about the knowledge systems of the aboriginal people were skilled campers and trekkers, so it was a challenge, but not difficult. 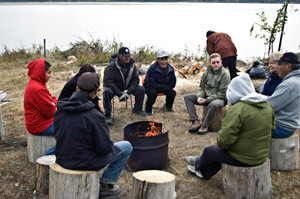 After breakfast, we gathered around the fire to map out the chores and responsibilities of the day. We actually met two times or more around the fire each day to go over what we had discovered and to listen to the teaching of the Elders and of workshop leader Joanne Barnaby. Joanne is a well known expert and advocate of bringing science and traditional knowledge together in development projects, especially in Canada’s north. She was instrumental in establishing the Dene Cultural Institute and is herself Dene. Joanne and I have worked together on many occasions with the idea of having both a scientist and a traditional knowledge expert together to advise governments, resource development companies and aboriginal communities how best to handle the potential impacts of development projects on the communities. The foundation is to attempt to put the aboriginal communities on the same level in the playing field as the development companies by educating the scientists and technologists about traditional knowledge and how it can be interwoven effectively with science in reaching conclusions and making decisions on important projects. 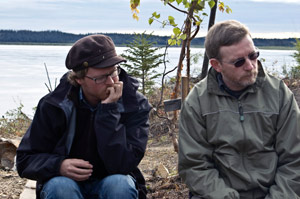 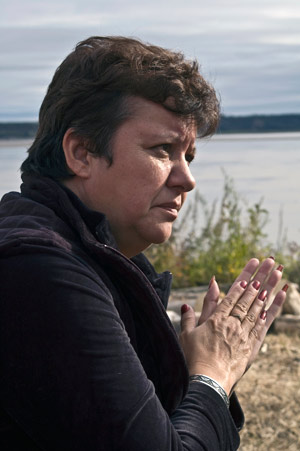 In all of these projects, we have invited both the developers and the aboriginal communities to separate meetings to assess what the main issues might be. Elders are the key element in the aboriginal councils and senior executives are the critical element in the development meetings. Once that initial meeting has been held, all formal subsequent meetings are held jointly so the discussions can be open. Our role is to bridge the gaps in understanding about the two different systems of understanding the world around us. Our favoured technique is to demonstrate the process of interweaving by practical example, but that is often not possible, especially in very large projects, so we have prepared slide presentation to assist people to understand the ideas. 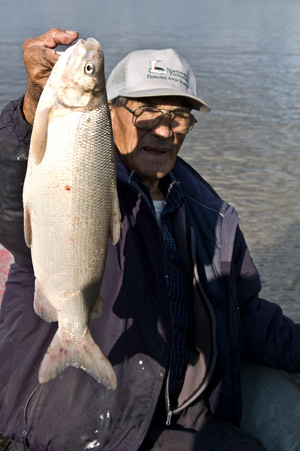 In this project to work with a fish camp, the Elders demonstrated their skills in setting nets to catch different species of fish in what often appeared to be areas with identical conditions. And yet when the nets came up the predicted species were in the nets.

Once the fish were in the boat we headed for the camp where the experts of cleaning and setting up each fish for smoking and drying for the winter months. Almost nothing of the fish was set aside. 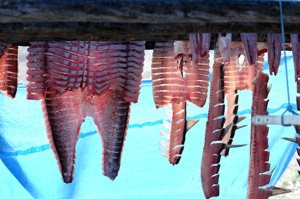 Even the scales were kept. The parts that were not used were carefully shredded to feed to the river. Each species was cleaned and prepared in a different fashion to match the way the flesh reacts to the smoke and how the fish is used during the winter months. While fishing is a major part of the effort, there are other tasks to be done as well.

Berries are harvested (we ate a good bunch of them!) from the woods nearby. These are open forests for the most part with black spruce the predominant tree. The ground is crunchy with many species of lichens. One of the other tasks is hunting. Much of the meat for the winter is moose and caribou, but rabbits, geese, and ducks are staple foods as well. 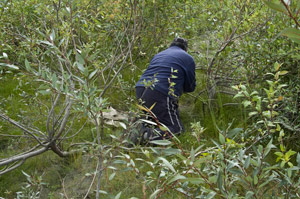 We were introduced to rabbit snaring. Rabbits in this area run along trails in the bushes. Our Elder’s sharp eyes picked out the rabbit trails hidden under the twigs and leaves. Once he demonstrated how to start looking for them in the most likely places we were also able to fins them fairly quickly, although he could distinguish quickly between trails that were used routinely and those that were just often used, a crucial observation to ensure a quick catch. 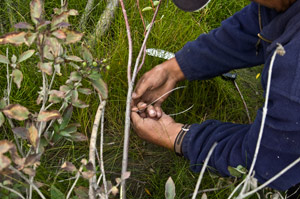 The snare was a length of sharp wire suspended below a crossed set of twigs. To ensure the rabbit ran into the snare, he lined the edges of the path in advance of the snare with two apparently broken limbs. Somehow knew which way the rabbits would run that night. 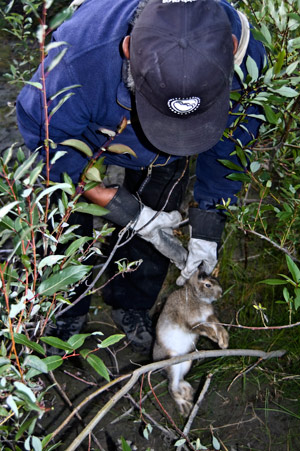 The next morning we went back to the rabbit runs and he was able to recall exactly where each snare had been set. Each time we set a snare he had quietly tipped over a tall branch so when we came back he had a marker that alerted him to the location from a distance. This was a real tangle of low-lying bushes, so without his skills we would have been lost even with the tipped over branches which really only he could easily pick out. As he bent to retrieve each rabbit, he quietly murmured a prayer of thanks to the rabbit for sharing his life and body. At each meal one of the family retreated a little way into the forest with a small offering from the table to the forest or to the river. Each time the boat left a small offering was given to the river — either tobacco or sweet grass.

By the end of our stay with the Lafferty family the scientists were very impressed with the local knowledge and understood how the traditional knowledge could really speed up the acquisition of data. The Elders told stories in the evenings. These stories introduced the scientists to the traditional knowledge equivalent of well-established predictive models in science. A bit of a surprise came when the Elders demonstrated how they were able to routinely update these models from ancient times with modern experience coming from the hunters and gathering activities of the group. 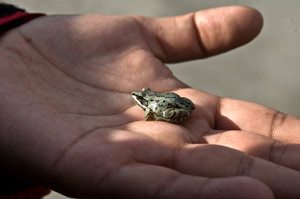 We were not there long enough to introduce them to the equivalent of the “theory” or “hypothesis” equivalent in traditional knowledge.

But it was interesting to see the scientist concern over the confident and automatic inclusion of spiritual and sacred rituals interwoven into the fabric of the knowledge base. Doubtless this was because in science the moral values and sacred or spiritual aspects are held apart from the knowledge base. Not so in traditional knowledge. Check out the movie and see how they wove the capture of a small wood frog into the mythology.

The starting temperature is compared to the pre-industrial period before large emissions of greenhouse gases had begun.