Kava is much more than the root of a plant related to the peppers. It is also a ceremonial gift used to introduce yourself as a visitor to a new village. Traditionally kava was presented in a leaf wrapping, but by the time we arrived in Fiji, the leaf had been replaced by newspaper. Today, huge bundles of kava are used by tour ships, and they are not wrapped, just tied into a cone shaped bundle. 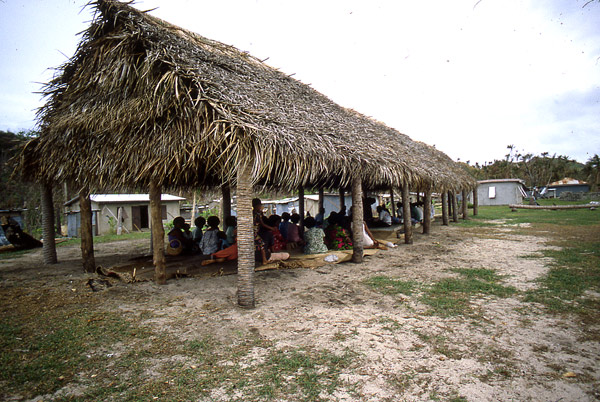 Each time we arrived at a new island, our spokesman, a chief from Bau, asked for an opportunity to request permission to work in the area,and to carry out research in the sea. The longhouse acts as many things, but for us, it was primarily a place to meet our potential hosts and the villagers, to make our gifts, present our proposals, and to drink mutual kava toasts served from a giant yangona bowl. 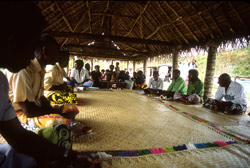 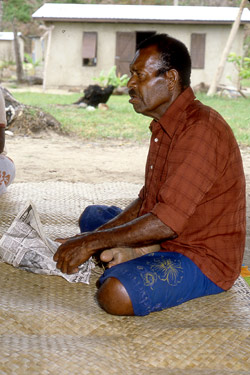 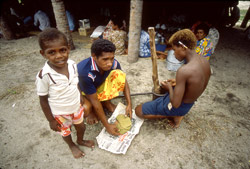 Once the package had been accepted, the roots were taken outside the longhouse where they were ground up by pounding them with a huge elongated mallet like a man-sized mortar and pestel. The roots were pounded into a powder that was taken back into the longhouse where it was added to a large wooden bowl. Water poured in created a most unappealing-looking brown tea. 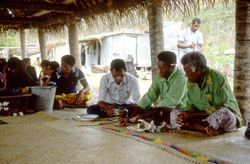 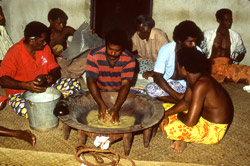 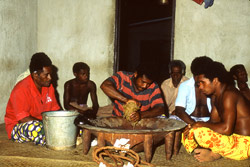 To ensure the mix was just right, the server drew the roots of a hibiscus tree through the water and lifted it up to show that the powder was thoroughly wet and had not sunk to the bottom of the bowl. A quick taste, and it was ready to serve. 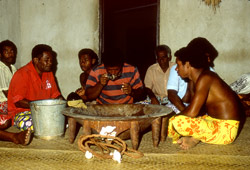 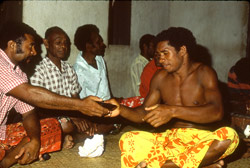 Before the kava was completely ready to serve, a coiled rope with embedded cowries rested in front of the yangona bowl. Once the server pronounced it ready and the official taster had completed his bowl, the rope was stretched out to point directly at the chief. To one side a small Tridacna clam shell indicated the guest of honour. 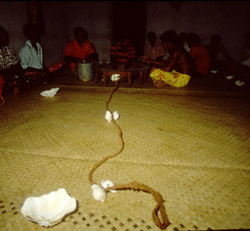 As the yangona mixture was passed around, the men clapped once with a very solid muffled clap, then as the guest drank all of the contents from the the half coconut bowl full of the kava drink. the men again clapped three times. The kava bowl must be empty. To prove it is empty the drinker spins the bowl on the mat signifying he has successfully drunk the kava.

Kava is not unpleasant to drink. It has a mild anaesthetic sensation on your lips and mouth, so that after a while they are slightly numbed. As the drinking continues, most people feel quite relaxed. Unlike alcohol it does not create any nasty side-effects such as uninhibited or violent behaviour. Finally, because there are no bottles, there is no waste. Kava is also drunk as entertainment in the evenings. The evening begins with lots of chatter, but ends with very sleepy quiet guests, slipping away to go home to bed — very civilized! 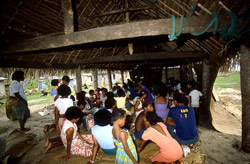 In general, women are not invited to be a part of the formal ceremony although they are often permitted to be present in the longhouse, just not to sit amongst the men. My wife presented a bit of a problem when we first arrived. In most villages, she was briefly given the status of an honorary man so she could sit with us. She then excused herself and returned to being a woman to join the rest of the village women at the other end of the longhouse.