Climate change is a fascinating topic from a wide range of perspectives, not the least of which is that if the current hypotheses about global warming turn out to be true, the current uncontrolled experiment in global terraforming could be extremely challenging for all of humankind in the centuries to come. In an earlier blog, I summarized some of the facts and controversy about global warming. If you refer to another earlier blog, however, you will notice that almost every country in the world has a government strategy, or is developing a strategy, on how to adapt to the global warming effects that are most likely to affect their country. In other words most governments accept global warming as a fact and are gearing up to adapt to it. The question in this blog is about anthropogenic global warming (AGW) and what people think about the idea that the global warming trend is actually caused by people, not nature.

And of course, there are many other similar questions. I could offer my own opinion, but it is probably more interesting to see how the world views anthropogenic global warming.

I wondered (and still do!) what the link is amongst these countries. My first thought was that perhaps literacy could play a role. The data for this chart is a combination of the data from the World Bank and from the website Geography IQ. These have been combined to see if there is a relationship between the level of literacy and the acceptance of anthropogenic global warming. The chart is called a scatter diagram. If there is a relationship, the dots will form a line. If there is no relationship, they will be spread all over the chart. Well, guess what! They are all over the chart. Clearly there is no relationship obvious between opinions about anthropogenic global warming and literacy rate. 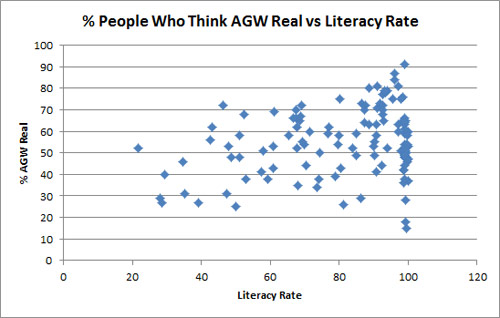 Next I wondered if people in countries that use increasing amounts fossil fuels might be increasingly disposed to deny anthropogenic global warming. If so there could be any number of reasons, but I just wondered if there was a relationship. The data in this chart are from a combination of Gallup and the World Bank. Once again, the dots are all over the chart. Clearly there is no relationship between the percentage of fossil fuels used in a country and the opinion of the people abut anthropogenic global warming. 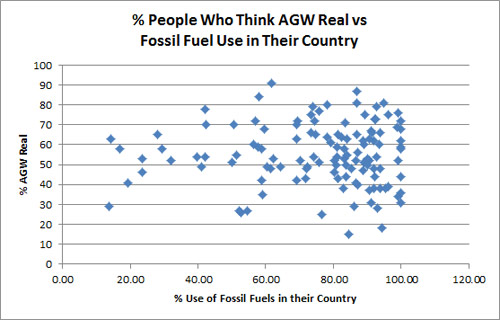 While religion is primarily based on beliefs that do not originate from physical or observational evidence, nonetheless, religion often pronounces on physical reality from a base of a non-physical evidence. Perhaps for this reason, religious beliefs often figure strongly in controversial subjects where science suggests something in the physical realm, based on evidence from the physical realm, that contravenes the physical manifestation of a religious belief founded on a non-physical principle. While the science of climate change does not in any way address religious beliefs, scientific findings suggest we should be more circumspect in our use of the natural resources and their disposal. By contrast, some people believe that we were given dominion over nature so we can use it to our benefit. Other religious people argue that global patterns are the will of God so it would contravene the will of God to attempt to change those global patterns artificially. These and other areas of overlap in the physical realm have given rise to some of the controversy over global warming and any suggestion that people are responsible for the warming trend. So I tried to check it out. Is there a relationship between acceptance of AGW and religiosity in countries?

While the data are spotty, nonetheless there are some data that can be used to see if religion creates a bias. These data come from a combination of Gallup and the PEW Foundation. As can be seen in the chart, there may be a very slight relationship, but the data in this graph are too few to be certain. In any case the relationship is not strong, so even if there is a relationship, it is too weak to explain much of the variation in world opinion on whether people are the cause of global warming. 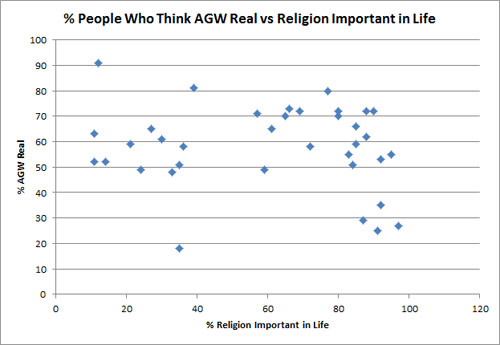 So we have arrived back where we started. Perhaps the reason there remains doubt is not so much the scientific evidence, nor the belief systems, and nor is it the ability to read the information. Instead it may be quite simply that it is very difficult for human beings to accept that there is a problem until it confronts them directly, rather than using the indirect evidence of science.