Capitalism is an economic system, not a social system. Capitalism regards an employee as a cost, an expensive package of skills and energy, not a person. The cost of employees needs to be reduced as much as possible to increase profits. Capitalist owners monitor profits, and expectations of profits in the stock market based on their investments. Capitalist strategies control production and distribution to dominate the market. This domination trends to mega-corporations eliminating smaller businesses and corporations while reducing employee numbers or their wage levels as much as possible. The end-point has the unintended consequence of reducing the financially capable consumer base to just those who own capital, or who manage to maintain an entrepreneurial business against the competitive pressures of capitalist giants. Everyone else is a low-paid employee or unemployed and not able to purchase many products or services. On a world scale capitalism has not reached this point yet, so has not yet had to adapt to the end point of the trend. Instead it has moved to global markets and employee bases to delay that inevitable end point of capitalist strategies that necessarily omit people from the equation.

So far the sun has not stopped, but in the deep sea, the black smokers do stop producing heat and sulfur chemicals. When that happens, despite the intricately developed and marvellous ecosystem that exists around the black smoker, the entire ecosystem comes to a screeching halt and almost everything dies or moves away.

The Place of People in Capitalism

Ecosystems model econosystems extremely well because there is an exact parallel between the individuals of a biological species and the individual business in an econosystem. The fact of humans is ignored in business and especially so in capitalism. Obviously humans are part of any business system, but the system itself does not view them as people. The capitalist in a capitalist corporation, as far as the system is concerned, is not a person, the capitalist is a package of assets, strategy, and a proportion of wealth that is developed and distributed within the capitalist corporation. In the same way as far as the capitalist system is concerned, an employee is just a resource, a package of energy and skills, not a person. Furthermore the employee does not really have to be a person, it can be a machine just as easily. In either case, the employee represents a cost, so the less the corporation needs to pay for the skills and energy the less expensive is the process of production so the more profit can be made. As far as the system is concerned it doesn’t matter whose name is on the share certificate just so long as the money from the sale of the certificate is invested in the corporation. It doesn’t even really matter if the name on the share certificate is even a person, it could be another company.

Ecosystems and econosystems are very similar in the way they operate. However, unlike an ecosystem which is completely self-contained, the econosystem is contained in and dependent on the human society that can and to a large degree does operate entirely independently of the econosystem. The econosystem is a construct of the human society on which it depends. In an econosystem, money is a rough equivalent to a package of energy and materials in an ecosystem. Money is a proxy for the equivalent of all or a part of a finished product in an econosystem or a living organism in an ecosystem. Both money and the living organism are consumed and for the most part the materials and energy they contain are transferred to the consumer. There is always some inefficiency in the transfer of both biological and monetary transfers.

People as Entrepreneurs or Capitalists

A subsistence (and/or barter) economy and society in human terms is most like an ecosystem in biology. In a subsistence economy people, actual people live or die depending on the success or failure of their ability to produce food and resource. In an entrepreneurial economy and society people exchange money as a proxy for materials and energy, but they do not distribute the capital amongst owners. Most entrepreneurs believe in the product or service they offer. In this sense the owner and the business are tied together. If the business dies, the owner does not die, but does break the tie to his product. He can still make a living by starting a new business or becoming an employee of another business. In a capitalist economy and society, the owners of the corporation are not closely tied to the business, but instead are tied to the strategy of controlling the production and distribution and ultimately to the apportionment of money within the corporation. 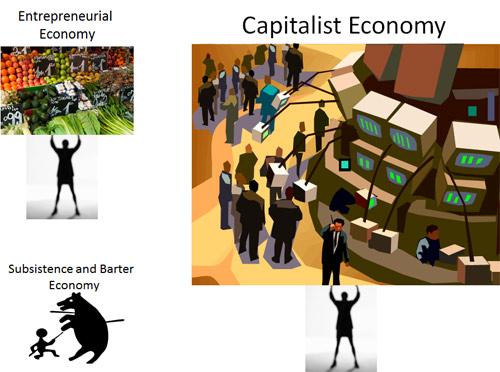 In effect, the owners of a capitalist organization are not in business for the sake of product or service, they are in business to make money. The stock exchange is an excellent demonstration of how the capitalist owners of stocks are monitoring a proxy demonstration of the proxy for materials and energy as a proxy for the expectation of profit. The stock exchange is only vaguely aware of actual products and sales. The stock owners often have parts of many businesses and are rarely aware of the products or services they “partially” offer, except in the way the business is doing at the bottom line. Being this far removed from the people aspect of the econosystem in society means the transactions on the stock exchange are insensitive to the human results. This is good for business in the short run, but can be disastrous for people in the system.

In the long run, a capitalist economy ultimately relies on a financially healthy consumer base to sell its products. But in a capitalist system, only the capitalists share wealth from the business. Employees represent a cost so are reduced in number or cost as much as possible. So left to its own devices, the system will gain a few very wealthy capitalists as small capitalist and entrepreneurial business are out-competed, assimilated, or dominated in the marketplace. The only other “people” in the capitalist system are employees who the system eliminates or reduces salaries if possible. So the overall society ends up with many unemployed or underemployed people with a few very wealthy people. Over time, in a local market only, consumers disappear or are not able to purchase quality products. Low purchasing power drives lower prices which in turn drives lower wages or fewer employees. If the population of people is constantly rising as it is today, the situation gets worse much faster. This is internally and locally unsustainable.

In most developed countries, the capitalist survival mechanism has been to hire offshore employees or switch to robots and to sell internationally so the market size is much bigger and can support the more hugely wealthy capitalists. With global marketing, local populations feel the employment crunch earlier because the available employment moves offshore, but the price of goods fall because of low offshore wages, so the shortage of goods is somewhat delayed from the employment crunch.

The End-Point of Capitalism

When the entire market is involved in capitalism, the bottom line is that ultimately capitalists can only sell to capitalists – everyone else is unemployed or in exploited positions. Even the small business owners will for the most part have been swallowed by the capitalist giants. We are certainly not there yet, but the early signs are readily visible. The call on the parts of free market capitalist enthusiasts to open the markets more than they currently are by reducing regulations and taxes will exacerbate, not ameliorate the situation. Tax reduction tends to raise profits and increase unemployment. Loose legislative and regulatory control increases exploitative employment practices, allows fewer environmental and health restrictions of products and services, and encourages gouging practices by unscrupulous capitalist owners to maximize profits.

Although it is impossible to predict what the end result might be of allowing the capitalist system to ride all the way to the end of this trajectory, the system would either adapt or fail, to be replaced by something more sustainable, something that accounts for the fact that physically and financially healthy people, other than just other capitalists, are needed to act as consumers to keep the system going.

In the meantime, an artificial check on the unwelcome, if unintended consequences, of an unfettered free market rests with central governments as they attempt to use legislation, regulation, and taxation to add a measure of humanity to a system otherwise ignorant of the existence of human needs, while at the same time allowing a degree of freedom in the marketplace. It is an uncomfortable balancing act because the success and failure of politicians is largely dependent on funding from mega-corporations.

One thought on “Why Capitalism Fails Society”