Sustained Growth is Not a Stable Econosystem

If we take ecosystems as the model for capitalism, we may be able to see what is going on. Let’s begin by making a detailed catalogue of an unexploited forest ecosystem that has been around for a very long time, in more-or-less constant environmental conditions. Wait ten years and do it again. The result will be different in detail, but pretty much the same in general. Importantly the ecosystem has not increased in size or productivity, most of the species are in roughly the same proportions, and the trophic balance is the same. There is no substantial difference in the amount of any given material, biomass or mineral, from that which was present ten years previously. Minerals may have changed location, but are routinely recycled back into the soil.

Next, let’s hypothetically cut down all the trees. As long as we leave the trees on the ground, the local amount of material in the system has not changed, but the nature of the ecosystem has changed. If it were feasible to wait 200 to 400 years, we would probably come back to a forest ecosystem not too different than the one we left behind. The trees we cut down will have decomposed and the most of the trees’ minerals will have been returned to the soil or organisms.

Instead of leaving the trees there, let’s take them away and use them in some commercial way, perhaps to make lumber and paper. Now when we come back 200 to 400 years later the ecosystem looks more-or-less the same. It has returned to being a forest. However, if we measure the minerals, there will be a smaller amount. If we measure the water, it will be about the same as before.

In an ecosystem, the energy source is the sun. It has been shining on the earth for billions of years and will continue to do so for billions of years, so it is a resource that is available on an infinite time scale. The trees used the energy of the sun to rebuild themselves using the water and minerals in the soil. However the basic building block of carbon is not in the soil. To grow, trees need carbon. Guess where it comes from? The air. Yes, trees are mostly water and air. They consume carbon dioxide and metabolize oxygen (the other part of carbon dioxide) back to the air. In effect, the trees are a carbon “sink” and an air freshener. The carbon in the air is trapped in the soil if the trees get trapped in the sediments when they fall. Otherwise the dead trees decompose and release the carbon back to the air.

So the system is stable when the environment doesn’t change. The system has what amounts to an infinite supply of energy metered in at a given rate depending on latitude. The system recycles everything except perhaps carbon in certain situations. Carbon is routinely cycling through the ecosystem, taken from and returned to the air every day. So carbon dioxide is an important resource as well. Carbon dioxide exists today because of past volcanic activity. The concentration of carbon dioxide in the air depends mostly on a combination of the ocean, the plants, decomposition, and volcanic activity.

First let’s hypothetically construct an econosystem similar to a forest. In this econosystem the sun is the infinite source of energy metered in according to latitude. The primary producers (farming, fishing, forestry as renewable sources of resources for industry, and mining including oil and gas as non-renewable but fully recycling producers for industry) are large mega corporations with a wide variety of infrastructures for production and distribution of products, as well as a huge system of communication and distribution of the wealth and subsidiary products both for its own uses and for the many strategic alliances, semi-dependent industries and truly symbiotic built-in corporations that make it possible to maintain the mega primary producers. There is a very large and varied array of corporations big and small that are dedicated to re-using, recycling, or decomposing the wide diversity of products back into the system so nothing is lost. The only elements that are ever lost to the system are built into vast sinks so that should they be needed in the future, they are a form of capital. The system is stable, the only mega corporations are primary producers or acquire processed goods from other econosystems that are themselves inherently consistent in their ability to deliver processed goods.

The entire system is governed by an implacable system of competitive and adaptive rules. The survival or failure of corporations depend on their ability to work within these rules and earn an income. Each lucrespecies has a set of characteristics (these may alter over time to adapt to changing conditions) that place them primarily in a life style of long-lives, little turn-over, and well-trained, highly skilled executives and staffers. There are some corporations that employ robots or machines in place of low-paid staff or slaves. Primary consumers (equivalent to herbivores in an ecological system, and to so-called secondary producers in a traditional economic system) that use the processed goods vary widely in size, but rarely approach the size of the primary producing mega corporations. Most of the higher level consumers are small but a few are larger corporations; all are highly specialized. Cheaters are punished if caught.

Oh, wait, there are no such econosystems in the world.

OK, let’s try to make the comparison with a simpler system such as a grasslands or savannah. Here the primary producers are primarily much smaller (grasses) corporations, numerous, widely distributed, highly adapted to annual changes, and able to spring into life when the opportunity arises. The herbivores or primary consumers (secondary consumes for traditional economists) by contrast are large (cows, antelopes, elephants) mobile corporations or groups of corporations that dominate and exploit the primary producers extensively. The top level consumers are sometimes large (as in predators), or small ranging from individual consumers living in large corporations called cities, to small businesses that supply specialty markets.

In this ecosystem, again the sun is the only source of energy and it is always available on a metered daily scale. Minerals and water combine with air to provide the building blocks of the grasses and small shrubs, all of which are cycled through the system until the decomposers have finished with their tasks, and the material is returned to the earth or the air.

Alas, there is no similar system in a real-world econosystem, but it is close to a typical captitalist system where the farmers are mostly smaller corporations with a few larger examples (trees on a savannah). The primary consumers tend to be the largest corporations (herbivore equivalents) with a few other large corporations (including cities) that use the products from these manufacturers. Once again there are some major discrepancies: the sun is definitely not the only source of energy. In fact the main energy supply (petrochemical products) is not renewable, so will run out. The main minerals used from them mining efforts are not returned to the system, so they will run out as well. Finally the large carbon sinks that reduced the carbon dioxide, methane and other gases from volcanic activity, in ecosystems is not present in the econosystems.

No econosystem is sustainable under these conditions because in essence they are using more than they are returning to the system, although they can continue to exist as long as the resources last. In ecosystems, if there is no limit to the resources, organisms increase in numbers until the resources do become limiting. As the populations increase, the rate of increase also increases. At some point the resources, one by one, begin to run out and cannot be recycled fast enough back into the system. At this stage, the rate of population increase begins to slow down, but the rise in numbers almost always overshoots the carrying capacity of the ecosystem and the population experiences a rapid decline with lots of disease and starvation. After a period of time, if the animal or plant in decline does not disappear, which they often do, then a gradual recovery takes place. The shape of the curve that depicts this universal biological tendency is called a “sigmoid” curve because it is the shape of an “s.” Over time a series of these sigmoid curves follow one after the other each oscillation getting smaller until a degree of stability is reached with the resources being used and recycled at about the same rates. In each sigmoid curve, the initial rise is slow, then speeds up. As the resources get limiting, the curve bends to begin the shift to a downward trend. The first inflection of this curve on the upward slope is the actual point where the resource has become limiting, not where the peak occurs. By the time the population peaks, it is in serious trouble and heading for a very unpleasant and sometimes terrible time. 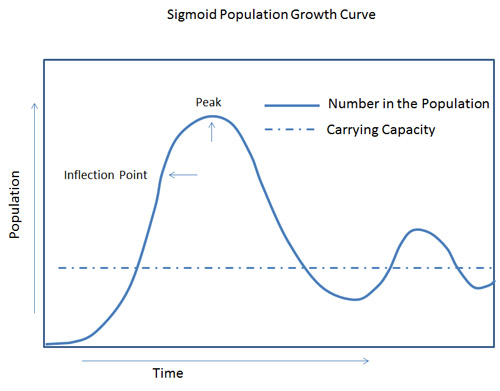 People on earth are in a very similar situation to the ecosystem where at first there seemed to be no limit on resources. The economic systems became increasingly effective in using the resources and allowing the increase in numbers of individuals in the system. The first part of the sigmoid curve was the long slow tail from 100,000 years ago to about 10,000 years ago. From then on, the curve began to slope up faster and faster, just like every other example in biology. Even a cursory examination of the curves of human population and economic growth, which are similar, suggests that we are just about at the inflection point. Just as with normal biological species, our ever-increasing use of the resources in ever-increasing competitive fashion will soon reach an inevitable inflection, followed by overshoot and collapse.

The comparison here is metaphorical and probably not exact, but it is pretty close in all the lead-up characteristics, so it is likely to be pretty close in the final predictions as well. And that is why economists need growth in the economy. We are still on the upswing slope of the sigmoid curve so to satisfy the constantly increasing population of people and corporate use of resources, we need to constantly increase the resource extraction, use, and production of finished goods to satisfy the upper tiers of consumers, individual and corporate.

Does that make constant growth equivalent to a stable economy — no it merely predicts that the resources will soon become limiting. Just which resource will be limiting first is anyone’s guess. One hypothesis at the present time is that the greenhouse gas effect of carbon-based gasses will cause the planet to warm, reducing the land available by sea level rising, and limiting harvest from the sea by acidification, reducing agriculturally available land due to drought and flooding, increasing unfamiliar diseases in all latitudes, reducing forest production, and others as well.

So if an economist tells you we need sustained growth to create a stable economy, you can tell him he is dead wrong, it merely suggests we are on the upswing of a curve that will of its own accord in time turn around causing untold misery to billions of future corporations and people.

Let’s assume it is possible to develop a stable economic system the returns all the materials to the biosphere in a useable form. Now if there is a way to develop an economic metaphorical equivalent to a rain forest, then economic growth would resume until that stable economic system transformed to the rain forest equivalent. At that point the economic activity would be greater than previously, but could not continue to grow and still maintain stability.