The goal is to drive an econosystem currently in place (anywhere) towards a highly diverse economy solidly founded in primary production and primary consumption (more-or-less the same as secondary producers in economic terminology), with a very elaborate infrastructure functioning to distribute the raw materials, products, information about the end products, and wealth. The infrastructure itself will spontaneously develop and support allied and dependent businesses. These infrastructures include physical structures such as roads, rail, airports, as well as communication systems such as mail, telecommunications, information transfer systems including the various satellite and digital infrastructure elements used to support Internet services.

Suppose we examine ecosystems as a metaphor for economy systems. If we translate a Ricker Curve from harvesting in a sustainable fishery by changing the axes to reflect the variables in an economy that are parallel to ecological ones, it will look like this. 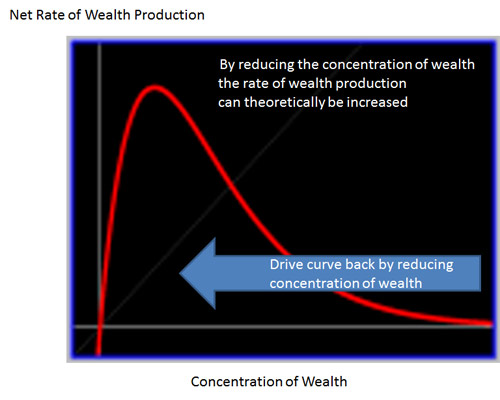 Modified Ricker Curve demonstrating the possible effect of reducing the concentration of wealth.

The idea of this model is that if you reduce the concentration of wealth into mega-corporations of a given lucrespecies, it is theoretically possible to increase the rate of wealth production by that lucrespecies in a sustainable fashion. Exactly the same principle is true in every other part of the econosystem. By selecting the lucrespecies (types of corporations) that are to be harvested (taxed) the overall system can be adjusted to ensure the only large corporations are those that support the entire system (primary production).

The key is to harvest wealth to create a selective force against the concentration of wealth into secondary and higher consumer level mega-corporations. The taxed (wealth-harvested) corporations would be those that are not in the business of extracting and processing raw materials and are not corporations using those raw materials to produce finished goods.

The effect is similar to harvesting only adults from a population of fish thus encouraging increased productivity in younger fish. In an economic sense, the idea is to encourage smaller corporations that are more productive than large corporations in non-basic enterprises. The taxed wealth is used to assist in the development of an interactive economic infrastructure by mega-corporations primarily restricted to primary production. The model predicts that if the harvest is designed according to principles of sustainable yield, productivity will actually increase.

The principle of selective harvest is also well-known in forestry and might serve as a more visible example. Here the major organic matrix is of course the trees. The rest of the ecosystem of a forest is almost entirely dependent on the existence of trees. Remove the trees and you remove the forest. However, if you leave enough old-growth trees and and harvest some adult trees, the productivity (from a wood products perspective) increases without destroying the ecosystem. Importantly it also does not destroy the forest. What tends to happen with forestry, however, is that the industry campaigns for clear-cutting and reforestation. This effectively destroys the forest ecosystem and replaces it with a tree farm. So it is not a self-sustainable approach, although it is very profitable for the forest industry. Bad practice notwithstanding, if we use the sustainable model in this expanded draconian model, we can postulate that by selectively taxing so that corporations other than primary production corporations that grow beyond a certain size, do not accumulate wealth, it encourages the proliferation of smaller, agile, highly productive corporations.

The Feasibility of the Draconian Harvest

Would this work? Probably not. It is an accurate theoretical model, but the problem is that it would require an external selective force to successfully impose the selective taxes. And currently the only forces available to harvest wealth are all inside the econosystem.

Although this idea in ecosystems is fairly well understood it is very difficult to manage — not from a theoretical perspective, but because the managers are essentially inside the system and subject to the same forces they seek to modify. Thus, the interplay of competitive forces in the fishery reaches out through the various competing elements to influence the decision-makers regulating the harvest. In biological systems, the science defines the limits of harvest. However, the harvesters carry it out in a system that drives them to maximize their harvest to maximize profit through competition. Regulations reduce harvest and thus reduce profit, so fishers argue for higher limits. Politicians are strongly influenced by economic arguments because they and their offices are at least partly, and sometimes largely funded by the harvest in question, whether it is a fisheries or the forest industry. Politicians ultimately make the regulatory decisions.

How well are politicians able to make sustainable regulatory decisions? History shows us that it is not a very workable system until after there are major problems and usually not until the harvested resource collapses and the industry it supported crashes with it. At that point the fishers blame the politicians for poor planning and regulations, the politicians blame the scientists, and the scientists are reduced to tearing their hair out as they try to come up with a rescue plan to keep the resource organism from becoming either functionally or at worst biologically extinct. Sometimes this works and the ensuing regulatory plan operates only until the fishers perceive they can make more profit by lobbying to increase the harvest again.

Unregulated Free Market Capitalism is Like an Unregulated Wild Harvest

Harvesting raw resources and turning them into wealth through production and distribution of products to create wealth is not really any different than harvesting organic products that have already been manufactured by nature for reprocessing and distribution to create wealth. Using forestry or fishing as a microcosm example of the entire economy, we can see the identical pattern beginning to develop.

When a new fishery is initiated with no regulations, it begins to produce slowly as the industry adds boats and gear, it produces extremely well in the beginning stages, peaks and if no regulations are introduced, it will decline until it becomes so unprofitable that the fishery ends or the stock is wiped out. The historically usual pattern is that the fishery is unregulated at first and follows the same trajectory as the unregulated fishery. 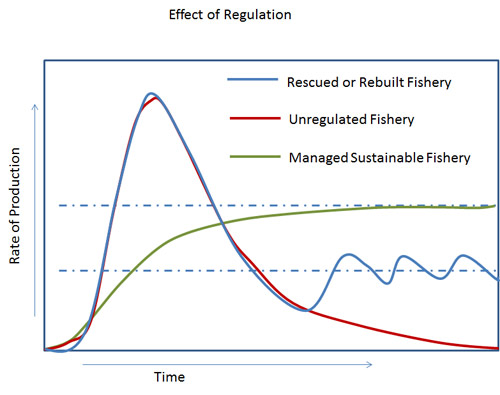 Regulations are essential to maintaining a sustainable fishery in the long term.

Scientists are able to predict where the fishery is on the curve so can and often do warn the industry that they are at or near the peak and the fishery will decline without regulation. Fishers normally object and say that the fishery is fine and that it is producing more than ever — which is usually quite true. After the fishery falls well below the economically sustainable level, fishers usually ask for subsidies and the subsidies are usually granted. This drives the stock lower and when the fishery continues to fall, regulations are finally instituted. If the regulations are placed in time, the stock will recover to a low level at which point the fishery renews and the stock is held at a low level by the constant fight over limiting the fishery and demands to open it. The oscillation of improvement and decline continues unless the brood stock gets hit with a debilitating event or illegal fishing is too heavy for the stock and then it crashes again. This time the fishery is essentially economically extinct and usually remains extinct for a long period of time.

Theoretically if every fishery were managed for sustainability from the beginning, a higher level of long-term productivity will result. However, the tensions between the capitalistic imperative to compete and the resilience of the resource usually means that the fishery is over-exploited after an initial period of excellent harvests.

If we examine the global economy in the same light, we can see identical patterns. In this case however, the resource is the entire world, not just a localized fishery. This means that the complete resource base is enormous. Even for fisheries, it was not until the 1960’s that the ocean was formally declared less than infinite in its ability to handle world fisheries. In the economic environment where the natural physical and biological assets of the world are deemed to be free goods, just as in a fishery the only cost is that associated with the extraction of goods. The pattern, of course, is the same, but the time frame is very much longer for a resource to reach any limits. In some cases the resource is not renewable. in this case it is only the steepness of the curve that changes. It will always bottom out, even with regulation, and regulation of harvest of non-renewable resources if rare indeed. The attitude is to get it before someone else does, because it ultimately will be gone. That is why the capitalist ideology is eliminate regulatory activity by the government, or at worst lobby hard to control the regulations themselves. It allows immediate competitiveness to maximize the returns in the short-term. In both ecology and capitalism, there is no incentive for individuals to undertake long-term planning beyond known periodic (usually annual) variations in conditions. In situations where finite resources are concerned, government planners usually concur. Where renewable resources are being used, there is an implicit understanding of the principles, but an explicit reluctance to manage them unless there is an emergency.

To project into the future is always tricky, but the historical legacy of so-called sustainable management of resources is so long and so uniform that it is highly unlikely to change unless there is a fundamental change in human behaviour. Such fundamental changes seem only to occur when the situation is dire. In at least one case in our collective past about 100,000 years ago, we nearly went extinct before we changed our behaviour patterns and learned to cooperate. Imagining when that crunch will come and what it would be like to live through it is not a fun task, nor is it likely to be near enough in time that any planning we do now would be useful. We need a method of instituting sustainable management of resources and people in a competitive mechanism that by its nature exploits all of its resources until it is competed to a standstill or it over-exploits the resources and declines in the face of the competitively induced lack of resources.

In theory we know how to manage resources sustainably. In practice it only seems to happen after there is an emergency because of over-exploitation. Again speaking theoretically, managing for sustainability within a system is very difficult because the people or agencies charged with managing are themselves subject to the same influences. Enlightenment is very difficult to inculcate when profit and wealth are the real motivating forces.