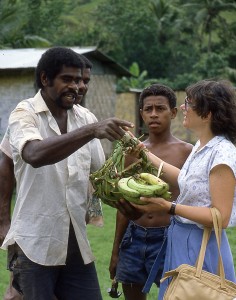 We travelled by van from Nandi to Suva and our first impressions were of interesting people and scenery. One of our first stops was to buy lunch from one of the local roadside vendors. Although we were travelling from Canada, we had lived in the West Indies for a while so were comfortable stopping and chatting to people along the way. Everyone we met was enthusiastic and interested in our little group. Unlike the coral islands of much of the rest of the Pacific this landscape was more like a countryside in South America or Africa with rolling hills dark earth and lush forests. 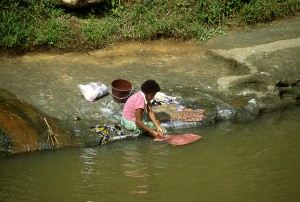 On the rivers, we often saw women washing their clothes and bamboo rafts carried both people and materials along the way. Whenever we stopped, children often came out from the small villages to say hello and talk to us. The basic construction of the houses was grass matting to form the walls and thatching to cover the roof. 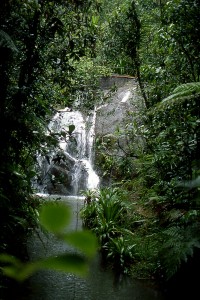 We had never lived in a house like this, but expected that this might be our style when we began to travel to to other islands. In fact, the style of house construction on the islands was a little different, with most of the house made from a thatch and only the flooring made from pandanas woven mats. Our work was of course scientific, but because we lived and worked with the local people, we got to know them and to observe the way they related to each other on many different levels. 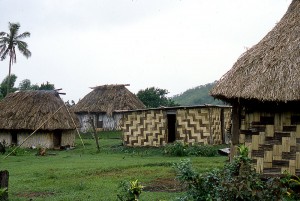 Our background from Canada was based on large economic systems, lots of people, and an assumption of using stores to get all our daily needs. We quickly discovered that even in large centers like Suva, stores were only part of the story. 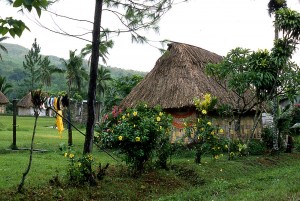 Roadside vendors such as we spoke to along the way had been gathered up in the city and for the most part presented their wares in a fun and chaotic market. The market was full of produce, fish, and large bundles of Kava, the root that is used as a ceremonial gift when visiting a new village. 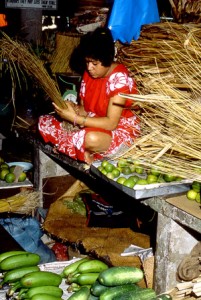 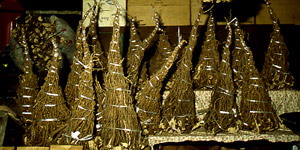 The memory of this difference stuck with me as we travelled to the outer islands where the villages were quite small and there were no open markets. These were quite exciting visits of course. The people were interesting, enthusiastic about their life and more than willing to help us both physically with our work and with the spiritual aspects of being in their ocean. In all cases, we asked permission to be allowed to study in their areas and they all agreed, often becoming part of the team. When we first arrived at our first outer island (Dravuni) the people had just weathered a typhoon. They welcomed us without any hesitation. We were at first unaware that their crops had been destroyed. 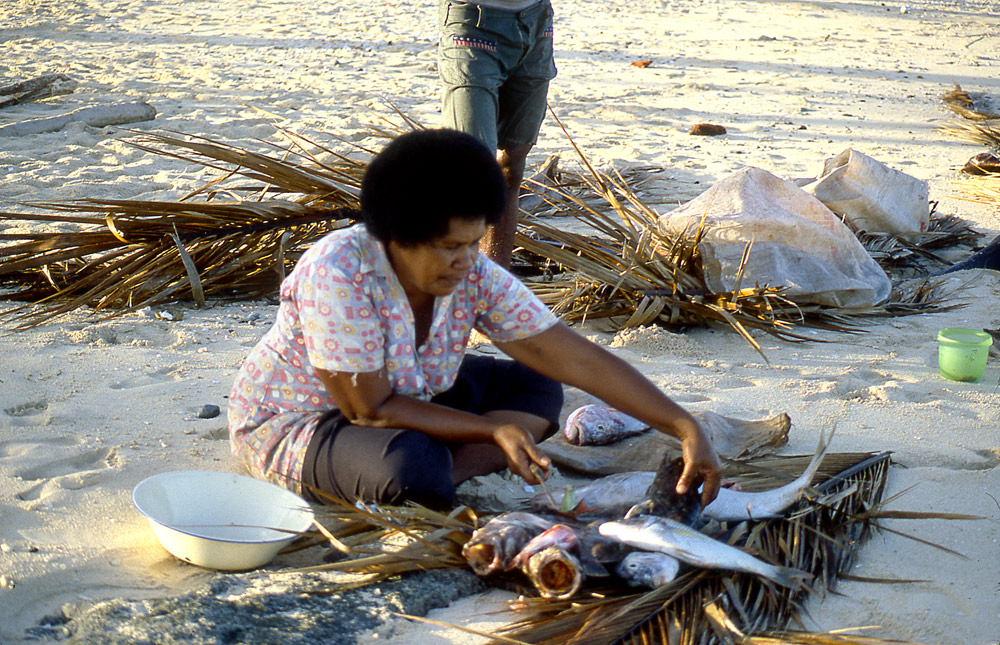 My wife was quickly accepted into the women’s group and discovered they had essentially only emergency rations. Our expedition had come fully supplied to be independent, so we immediately shared our food with them. It was an interesting time because they were very thankful of course, but not surprised. As we gradually came to understand, in these island groups, there is a culture of providing for each other. In fact, we learned to be careful about admiring something another person had.If we complimented someone on the nice fish he had caught, we were likely to end up with it as a gift. But these were very special kinds of gifts. 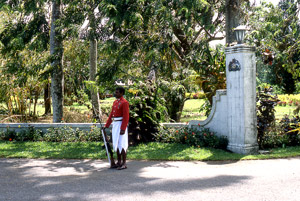 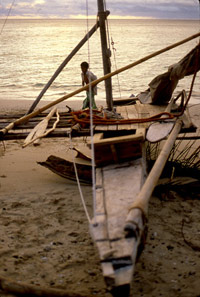 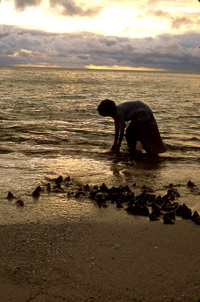 Freely given, they represent the culture of sharing; not formal selling, not even formal bartering. In the best of these situations, everyone in the community has the same attitude. In the end there is a remarkably even distribution of things that people have. The Chief is deemed to own everything including the land and the nearby ocean. It is his task to manage and make sure everyone is safe and healthy.

Therein lies the intersection of different economic cultures. On the main island of Viti Levu, where western values and modern technology were common, the island culture of sharing put the Fijian vendors at a significant disadvantage. The Fijians were naturally expecting to share in a manner that in the end creates an equitable division of material goods and food amongst everyone. So if a Fijian vendor is confronted with a haggler, it feels like the haggler is saying the share the Fijian is offering is not enough. The Fijian quickly lowers his asking price to match the haggler’s first offer. While we were in Fiji, the Fijians remarked on the fact they did not do as well in the market. Some years later we learned the feeling of inequity boiled over into a confrontation that is still not completely settled.

In any economy there will be variations in the culture of participants. Sharing, roadside vending, market enterprise, business entrepreneurs, and capitalists with only a modicum of regulation all intermingled in Fiji. Capitalism is a powerful competitor if left on its own. Economic and political governance that pays attention to these variable can better predict outcomes of strategic decisions.