In general people think in arithmetic terms. We are very good at extrapolating if things expand by adding. So if something is piling up by having a certain amount added each day, it is pretty simple to estimate how long it will be before the bucket is half full. For example, if a bucket has a capacity of 100 items and you add one each day, it is a pretty simple calculation to know that in 50 days the bucket will be half full. Here is a good question to illustrate how much more difficult it is to estimate when the addition is exponential. Let’s suppose we have a strange and dangerous organism in the bucket. If we feed the thing it will split each day and make two of itself. Then if we continue to feed them they will each split and make two more of themselves daily. Let’s also suppose that if the creature escapes from the bucket you will be in serious trouble. The nasty creature cannot escape by climbing out, it has to spill over the top. If I tell you that the bucket will be full in 100 days, can you quickly tell me when it will be half full, and how much time you have left to stop the creature from escaping? Now let’s also suppose you have a business meeting that will require you to be away at day 100, but you know you will be back for Day #106 when you can handle the problem. In the five days after day 100, some of the nasty beasts will spill out of the first bucket, so you know you need a second bucket to handle the problem. Can you tell me how big that bucket should be to handle five days growth after day 100?

This is the nature of population growth, it is an exponential rate of change. So while it may not look like much at first and for a long time nothing much seems to be happening, if you let it go until the change is half way, you may not have as much time left as think you do.

The answers to both questions are here.

Perhaps also it is in the inherent difficulty of being able to easily predict exponential rates of change as easily as we do simple arithmetic rates of change. Remember that problem about the nasty creature in the bucket? The scary part of exponential growth is that for most of the time you can’t even see much going on. let alone easily predict that it will mushroom into a major problem. For almost the whole 100 days, the nasty creature will just be a smear on the bottom of the bucket. Well, human population growth is also an exponential problem, so while we may not see the problem as dangerous yet (just a smear on the bottom of the bucket), and we at our present state of knowledge cannot accurately predict when the population of the world is so much too much that it will collapse (a bit like when the bucket is full), we do know that if it is left until the problem is really obvious (bucket half full), it will likely be too late.

The human population is not quite as simple as the story about the nasty beast in the bucket. For example people don’t split in half to reproduce, they have babies. Some women have none in their lifetime, some a few, some quite a few babies. The total fertility rate (TFR) is the average number of babies women have in their lifetimes. Theoretically, when the TFR = 2, the babies replace both the father and mother in the population. In fact, of course, some babies die before they grow up to have children so the TFR needs to be just a bit more than 2.0 to replace everyone who dies (a TFR of 2.1 to 2.3 depending on the death rates of the children in any given country). The actual TFR needed to maintain a constant population in any given country or area, is call the replacement rate. At the present time the TFR of the world is more than enough to keep the population growing for sometime to come, even though the replacement rate in some countries is at 2.0 or below. If it remains constant at its current value of 2.06, the human population will reach 9.5 billion by 2040, and peak at about 11.5 billion. Considering the difficulty of feeding even the 7 billion people we have today it is hard to imagine a world with over 11 billion people. Suppose the people get frightened and decide to have more babies to ensure that their children have the best chance of at least some surviving. If the TFR rises by only 5% (2.17), the population will exceed 20 billion. Of course long before that happened, total chaos and disaster would overtake the human condition and massive die-offs would happen due to wars, disease, starvation, and territorial disputes. We surely do not want that. But remember in an situation of exponential growth it is not easy to see the problem until it is really too late. However, a 5% drop in TFR to about 1.96 would eventually result in a world population of about 6.1 billion. That is a much more reasonable figure, although even that is too high according to many experts in ecology and agriculture.

Given all the factors, the current most accepted prediction is that the population will peak at about 9.5 billion people. That requires a continuing reduction in the TFR which may or may not occur. We certainly don`t have a lot of time to figure it out and make the adjustments.

Here is what the recent history of the world`s human population has been doing. 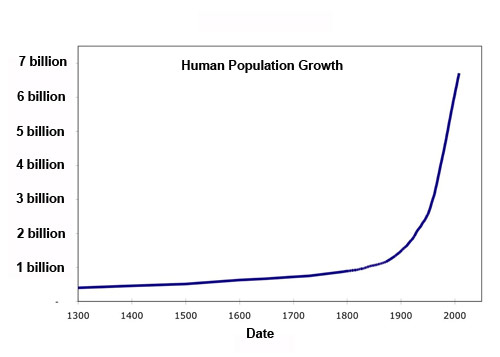 As you can see, after the entire history of human kind (over ten thousand years), only about 1.5 billion people were here in 1900. In the next 1% of human existence however (100 years), the population increased by almost 5 billion people. Now that reminds us of the bucket question.

One in seven people in the world is hungry today. But paradoxically, most hungry people live in countries where there is more than enough food. According to the UN Food and Agriculture Organisation (FAO), world production already is about one and a half times the amount of food needed to provide everyone in the world with an adequate and nutritious diet. So why is it that one in seven people is suffering from hunger? Instead of healthy, diverse food for local communities, industrial agriculture produces crops to sell on world markets, not local markets. In fact, many of these crops are not even intended for people (animal feed), or even for food (bio-fuels). World crop production has more than tripled since 1950 and that is encouraging.

The current projection for world population growth is a simple projection based on the trends of population growth rates (a combination of birth and death rates). Although the data is not specific, I presume the census bureau also assumes that people all over the world will change their habits and vastly reduce the number of children they produce. Let’s just hope they are not assuming that the death rate will rise dramatically — the only other mechanism to keep the population growth rate low. For sure they cannot actually know the future, but this is their best estimate. Here is a projection based on work by the US Census Bureau. 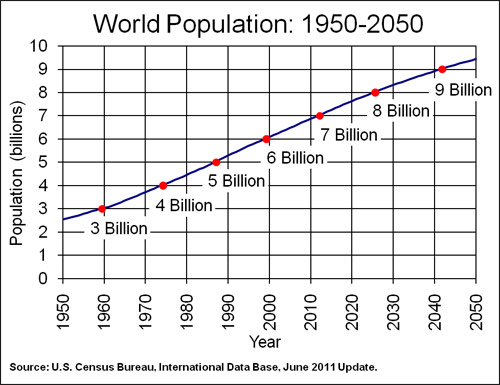 In this graph, the population growth rate (not the growth itself, just the rate) is assumed to have peaked about 1963. This means the number of children per adult is fewer than previously, but still producing children. Let’s hope it is not a projected increase in deaths due to who knows what…

In 1963, the peak rate of population growth was 2.19%. By today (2012), the rate has fallen to about 1.07% (so population is still climbing but half as fast). The projection estimates that by 2050, our population will still be rising but at less than .5% per year (population still climbing but less than 1/4 as fast as in 1963). One prediction is that by 2100, the world will still be adding more people but at the hopefully low rate of 0.5% per year with a population of over 10 billion people. This means people will still be producing more babies than just the number to replace themselves (currently a TFR of 2.06). These population estimates peak out at about 11.5 billion people on the planet. To make this work, we will need to increase the agricultural production and distribution efficiency by another 2.7 times what it is today with less space to grow things, a changing climate, and increasing industrialization of agriculture.

Interesting times ahead, and hard to predict what will happen.

Question #1) 99 days. You have one day left to solve the problem of the escaping creature! 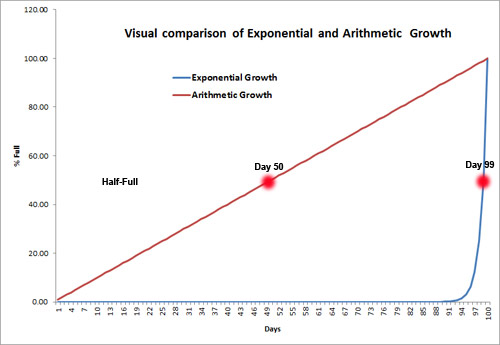 Question #2) If you really do have to be away for 5 days and can return before the 6th day you will need to have provided a bucket that is 32 times as big as the first bucket just to contain all the creatures that might get away. If you happen to be a week late, the bucket will need to be 64 times as big. Don’t even think about being a month late, because then you would need well over two billion buckets (2,147,483,648 buckets).

Return to where you were.